From One End of The US to The Other: Part 2

Arriving in the lower 48 brought relief, excitement, stress, anxiety, annoyance and then..... a little bit of regret.
When we got off the ferry in Bellingham it was hot and we could smell all the pollution in the air and there was traffic everywhere.  We weren't in Sitka anymore.  What did we do? Can we turn around and go back? Maybe we should have chosen an air station more similar to the Sitka environment, like Astoria, before jumping right into the hot, humid, beach city that we were headed to.

As soon as we got off the ferry in Bellingham we decided to find a donut shop (there aren't any in Sitka) and then took the truck to get new tires before we started our road trip.  The plan was to head to Seattle that afternoon to start looking for travel trailers, but Kolt found a couple in Bellingham to look at first and we ended up really liking the second trailer.  The rest of Day 1 in Bellingham was spent driving an hour and a half to stay the night in a hotel near the bank that we had to go to first thing the next morning.

Day 2 in Bellingham started off with a trip to the bank and then an hour and a half drive back to where the trailer was.  When we went to pick up the trailer, Kolt and the seller ended up having a really hard time switching out the hitches and had to make a parts run so Brinleigh and I got to hang out with the wife and their two kids for a couple of hours.  Thankfully, they were awesome and super nice and it gave Brinleigh a chance to run around in the sunshine.  Once we were finally able to get on our way, we only made it a few miles down the road before dropping Gunner off at Petsmart to get a de-shedding treatment while we went shopping at Walmart to stock up on food and other necessities for the trailer.  After picking up Gunner it was dinner time and of course I insisted on a trip to Olive Garden.  While at dinner I called every single rv resort/park and hotel within a 50 mile radius and not single one had any camp sites or rooms available.  Are you kidding me?  I finally found out that there was some kind of huge car show going on that weekend and was informed that I probably wouldn't find anywhere to stay anywhere in the western part of Washington.  After debating on camping out in a Walmart parking lot, we weighed our options and decided to just drive until we figured out another plan.  We eventually found a hotel that had one room left and we arrived at about 2am.  At this point you can imagine how much we were missing Sitka. 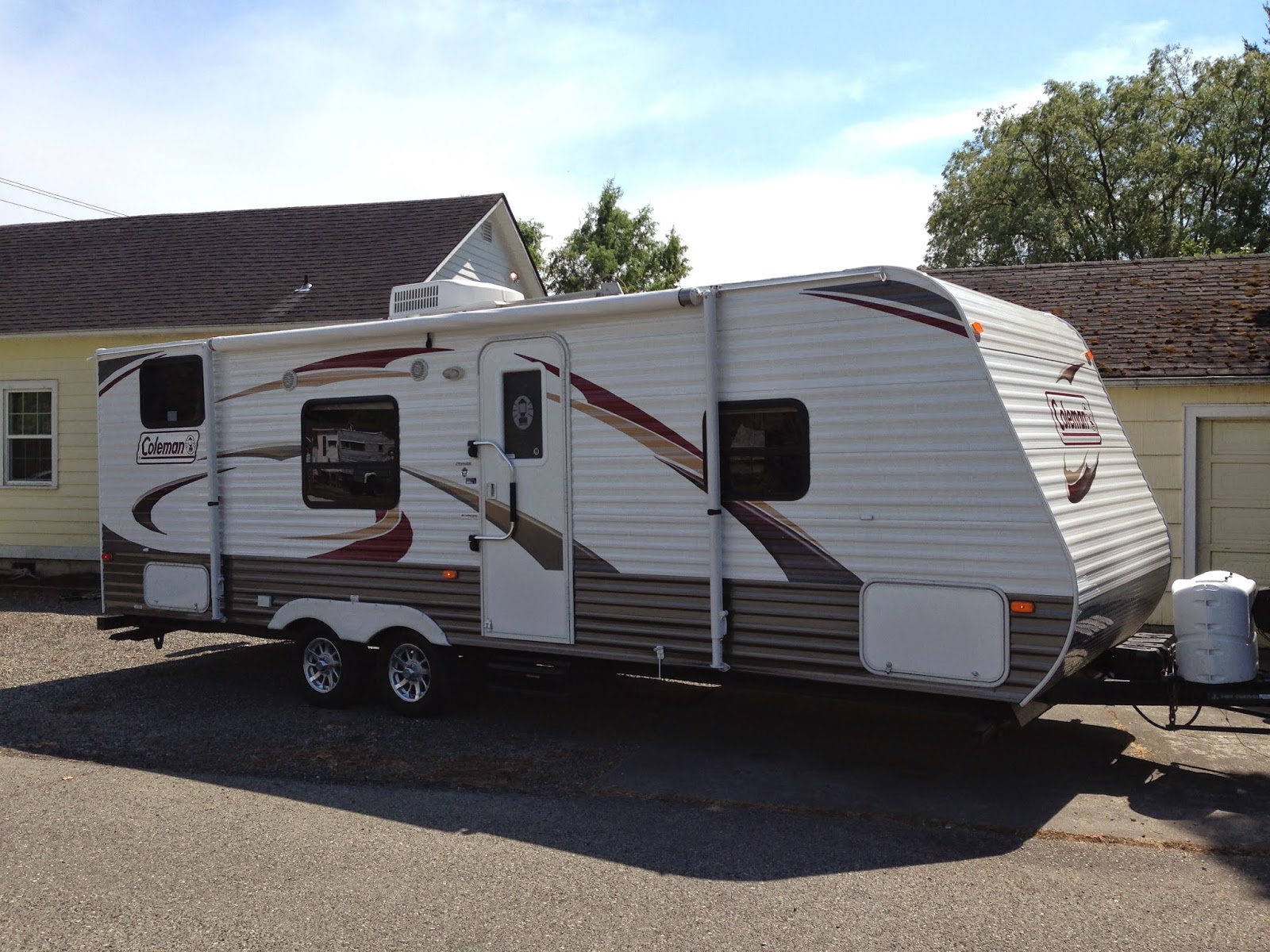 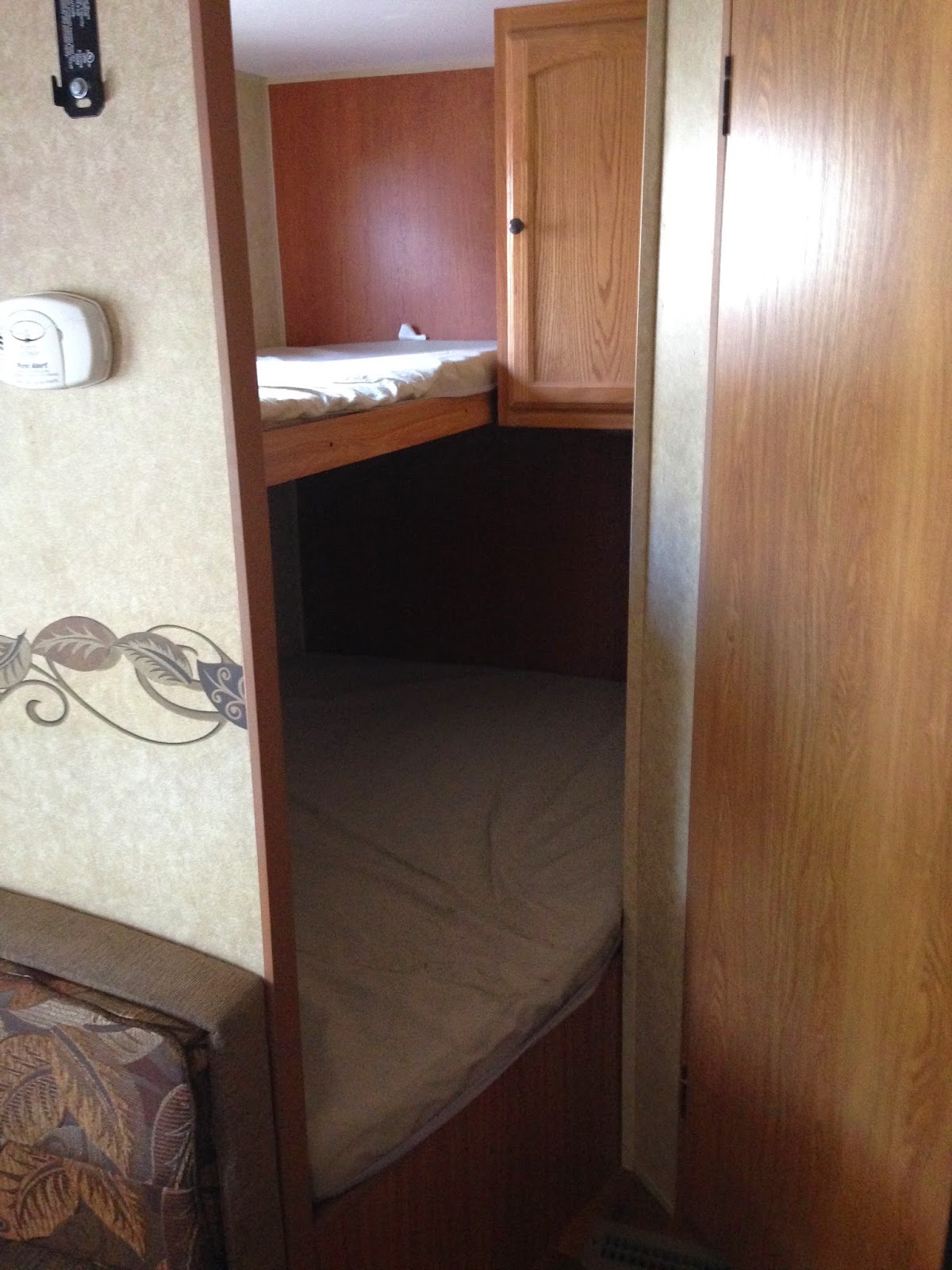 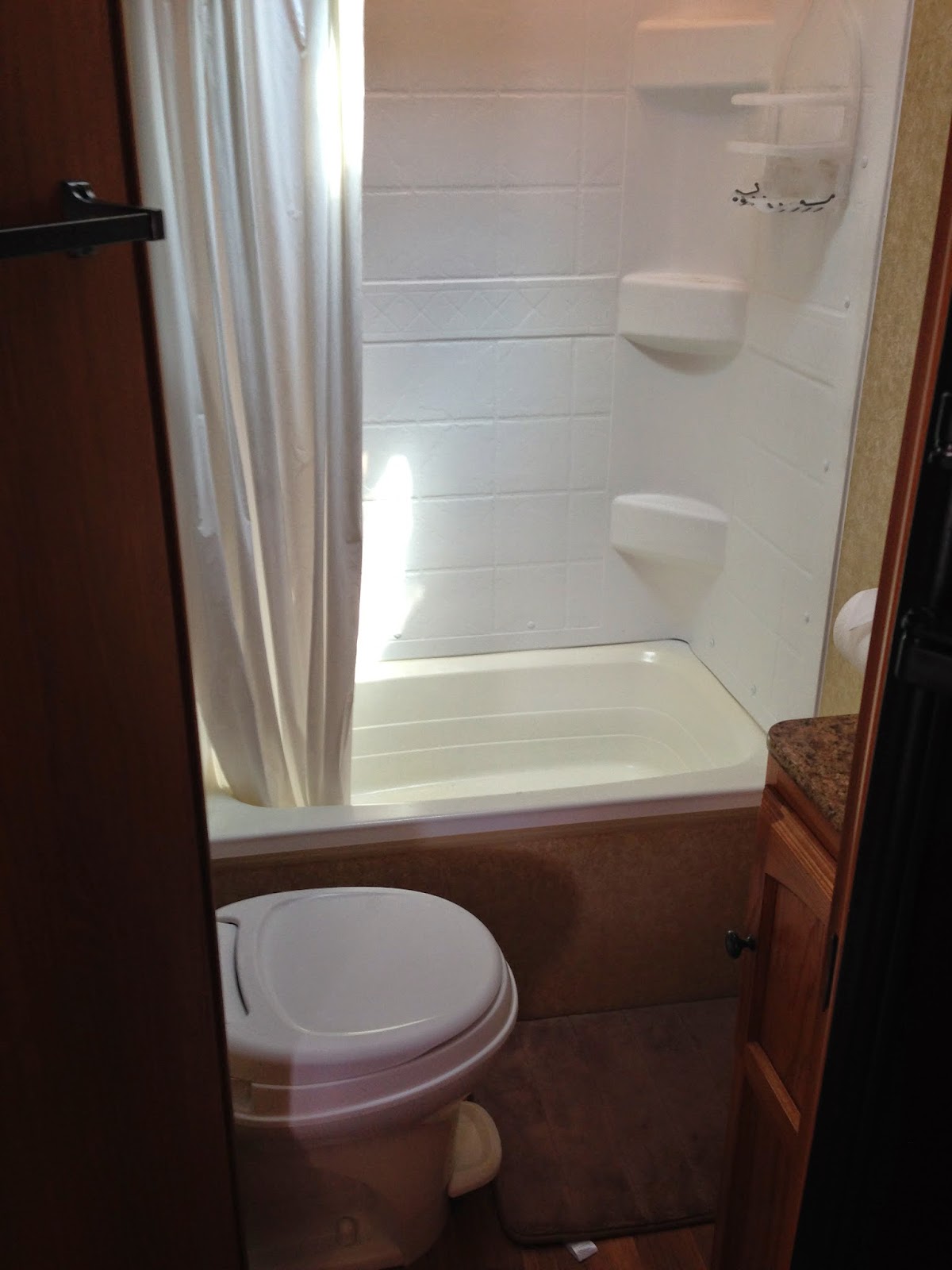 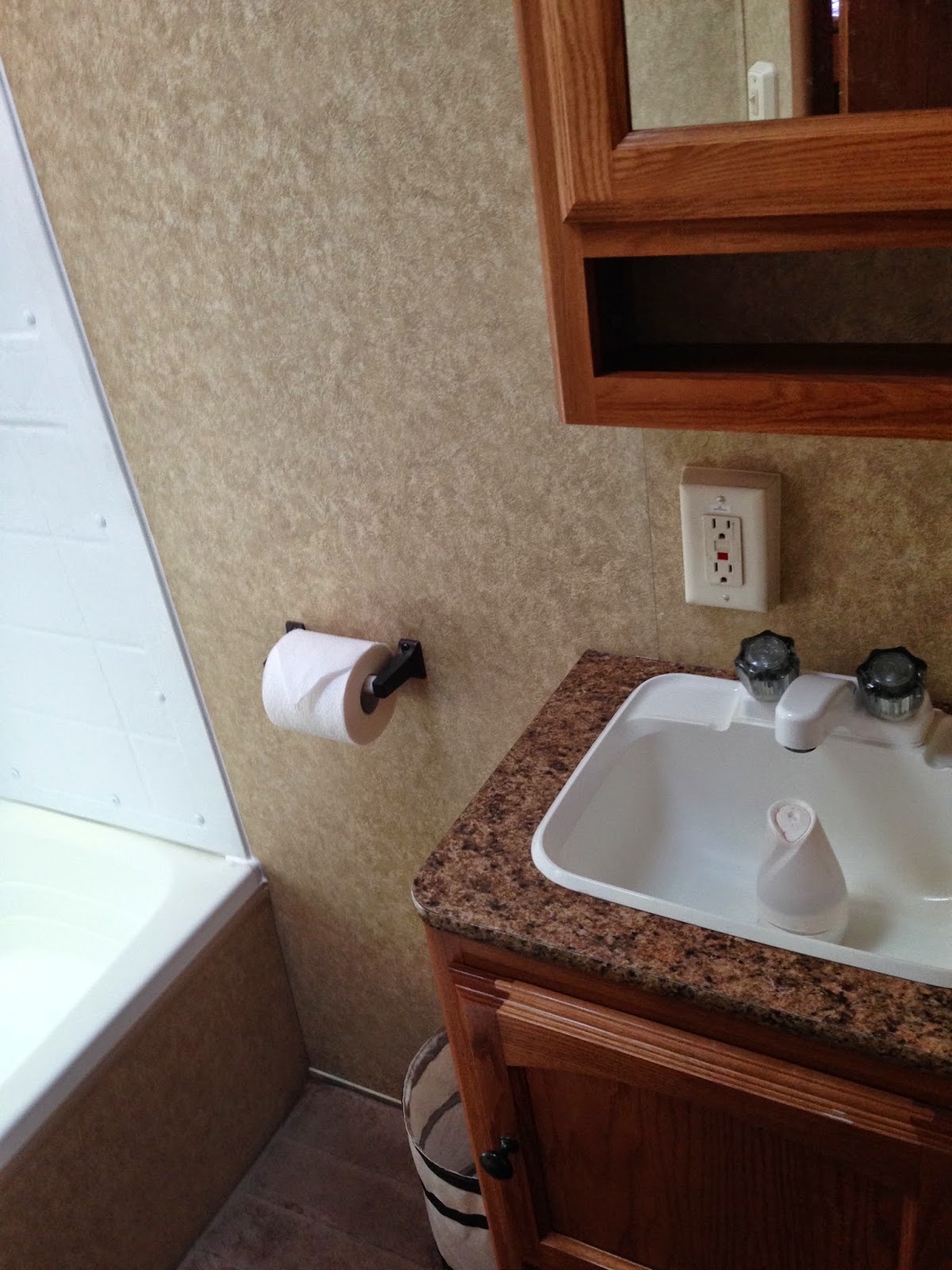 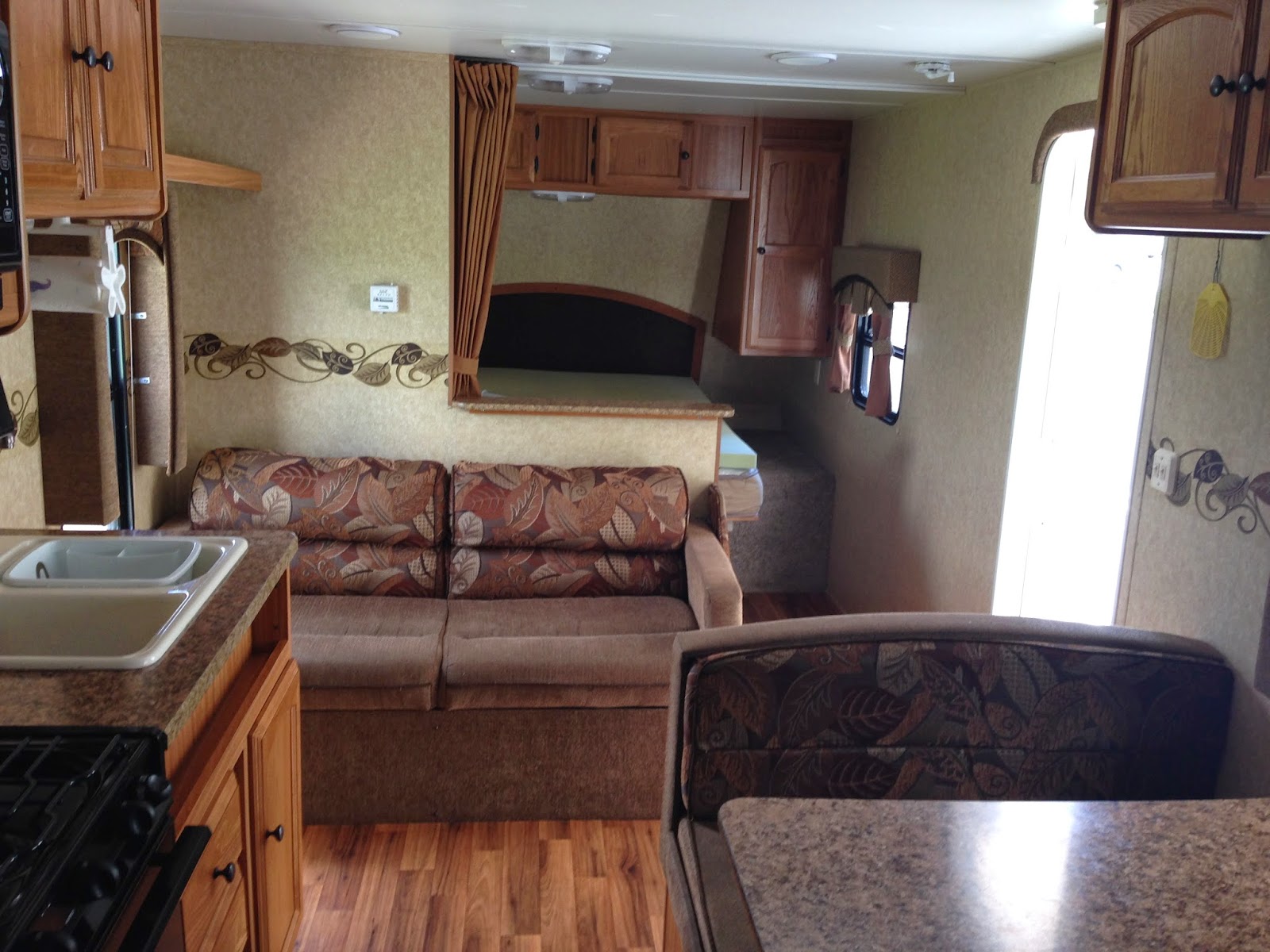 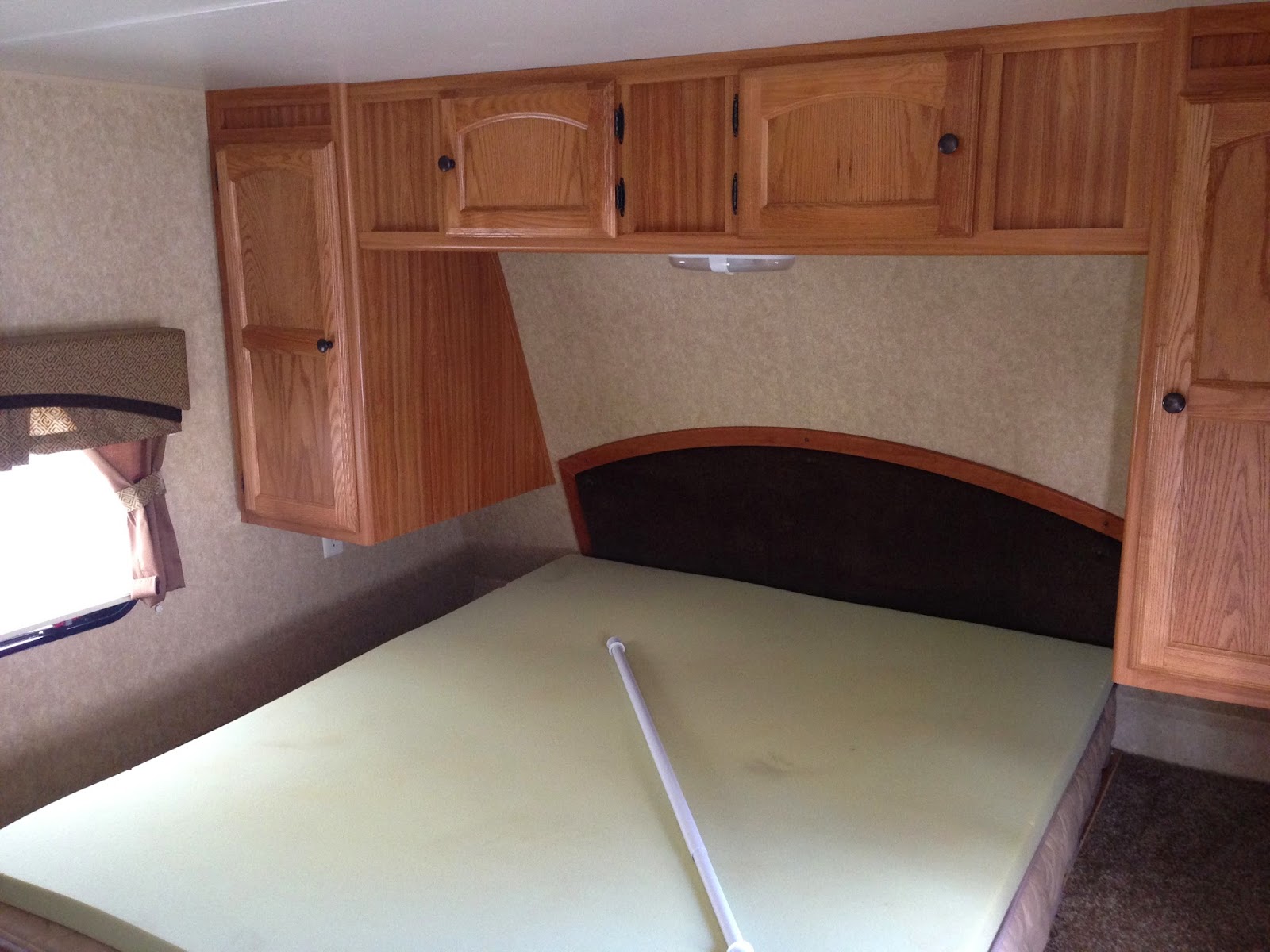 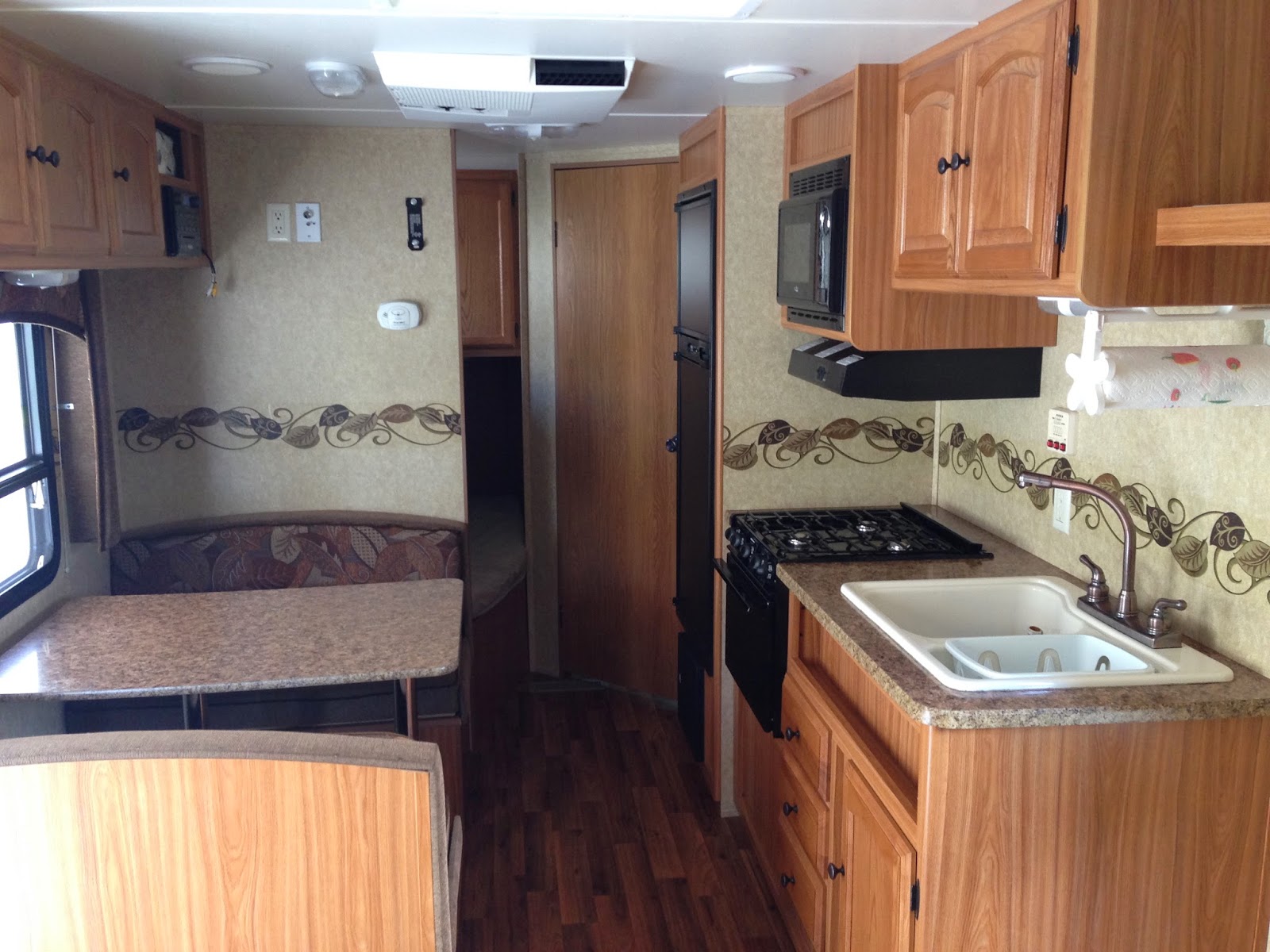 We spent ALL of Day 3 driving and first thing that morning, we made sure to plan a stopping destination for the evening.  We were successful at making a reservation at a KOA and we even arrived in the early evening so that we could unload the truck and set up everything in the trailer.  The KOA was really nice and the weather was beautiful.  We learned very quickly that the trailer was not exactly baby proofed and we had to get creative with how to accommodate a two-year old.
The back bunk bed area was made into Brinleigh's "area".  The top bunk folded up & we removed the mattress from the bottom bunk and stored it in the storage area underneath the bed area.  Then we set up her pack n' play on the hard surface of the bottom bunk along with a Rubbermaid bin full of toys and a couple of plastic drawers for her clothes.  She also had her own little closet cabinet.  This worked out perfectly because in the evenings when we put her to bed, we could leave the bathroom door open and it blocked off the opening to her "area" making it dark and more separated.
We put our small 19" flat screen on the wall above the dining area which helped to keep Brinleigh entertained, although she was more interested in climbing all over the dining room table, the couch, our bed and into her "area".

Since we found a trailer on the first day in Washington, we were ahead of schedule.  We had called the RV park at Yellowstone to see if we could arrive a day early but there were no available RV sites.  So we ended up driving as far as we could and stayed at a KOA about an hour from the entrance to the park.

The Story of Lexi and The Lizard

While I am still working on my novel of blog posts about our travels, I figured I would go ahead and start sharing some stories from our time in Florida so far.

You know how most states have squirrels or birds that you will usually see running or flying around outside?  Well Florida has lizards.  I am not over exaggerating one little bit when I say they are everywhere.  EVERYWHERE!  Especially at our house.  I'm not so sure what it is about our neighborhood, or maybe its just specifically the location of our house, but at any given moment you can walk outside and see at least ten lizards scatter before you have even taken two steps.

With that being said......
One night I was going to the grocery store and since the weather was nice, I decided to go with no A/C and roll down all the windows.  I started my car and opened my sunroof and out of nowhere, I see a lizard hit the cup holders in my center console and then jump onto the floor of the passenger seat and then scurry up into the bottom of my dash board.  Is our lizard problem really that bad that they are making their way into my car?  So of course, I did what anybody else would do and I immediately lost my shit.  Now I'm not afraid of lizards, I'm just not used to seeing them everywhere and haven't fully accepted them yet as constant companions in my life.  So I run into the house screaming about a lizard running around in my car while Kolt looks at me like I've lost my damn mind.  He went out and searched my car and no lizard was to be found anywhere, but he also realized that the lizard was probably sitting on my sunroof and when I opened it, the lizard fell in.  Kolt tells me not to worry, the lizard isn't going to come back out of the dash board and it's probably going to stay in there and die.  He made sure to reassure me that lizards don't smell when they die so nobody will ever even know there is a dead lizard somewhere in my car.  I still needed to go to the grocery store but all I could think about was driving down the road and this lizard either popping up on my steering wheel or my shoulder and scaring the shit out of me causing me to crash.  I'm being serious about this vision.  I braved the drive to and from the grocery store with absolutely no sighting of any lizards inside my car.
A few days later......
Brinleigh and I went to CVS so that I could cash in on a laundry detergent coupon deal and as I am loading my six bottles of laundry soap into the backseat of the car, I move something and what do I see????  That damn lizard sitting on the seat.  I try to think fast about how to approach this thing to catch it and get it out of my car but I was too slow and it ran somewhere into the crack of the seats.  Of course I immediately text Kolt telling him that damn lizard is STILL in my car!  He thinks it's hilarious.

The following day, I went outside to clean out my car.  As soon as I open the back door, there is my little lizard friend, chillin' on the side of the seat.  Again, I was too slow and he ran somewhere behind Brinleigh's car seat.  I went into the house to tell Kolt and he did a detailed sweep of the inside of my car, to include making me remove Brinleigh's car seat.  No lizard.  This thing is taunting me now.  So I told Kolt to wait a few hours and then we will go check my car again and the lizard would probably be somewhere in sight.
A few hours later.....  Kolt and I go out to the car, me with flashlight in hand and Kolt ready to pounce (he lives for this kind of stuff).  Kolt doesn't see the lizard so I decide to look in the car and right away I see him sitting on the seat on the other side of Brinleigh's car seat.  So I start jumping around and pointing to where he is, while Kolt plans his sneak attack.  Kolt is a better lizard catcher than I am and he snatches it up on the first try.  The lizard bit him and then peed on him, but Kolt let him go in the front yard.
So thanks to my husband, my car is officially lizard free again.
Posted by The Foreman Family at 10:28 PM 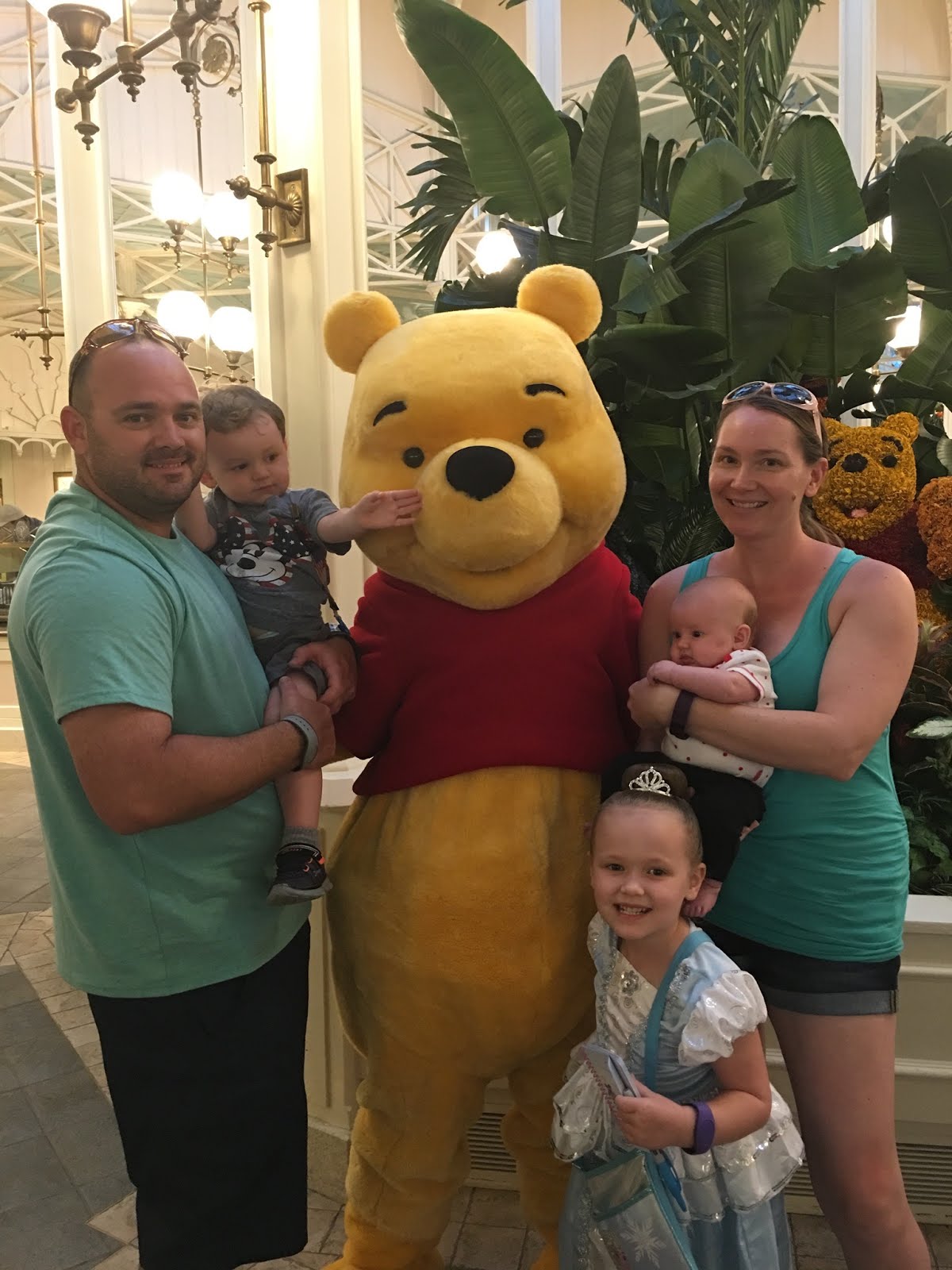